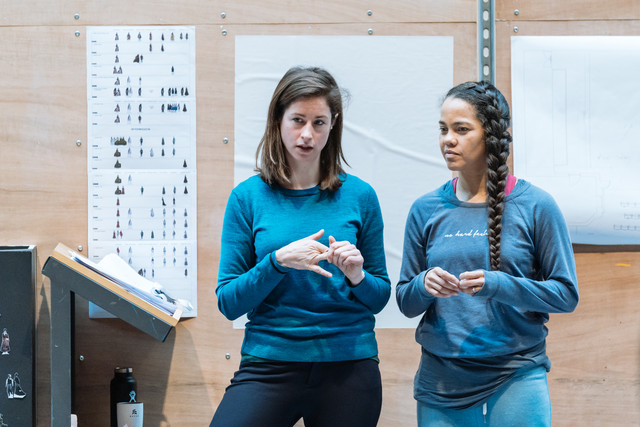 The objective of the week was to get the first half of Act 2 on its feet. Each day we aimed to tackle two scenes. Caroline's policy is never to have a script in the space, so the actors were all off book saying the words in the space and reacting and bouncing off each other, interspersed with intimate conversations with Caroline in between each attempt. In this manner, we would slowly but surely deepen the work and the optimum version of each scene would begin to emerge.

Shelley Maxwell, our movement director, has been in full time this week. Movement is a massive element of this piece,  especially with Caroline's vision being partly expressionist. Thus the week has seen Shelly and Caroline partnering in creating movement moments wherein instances o great drama, and transitional vignettes communicated in an abstract way.

Thirdly, the week has seen Tess Dignan, our movement director coming in. She has done afantastic job of crafting the aural vision of Caroline's world and coaching actors on accessing the full extent of their vocal power.